Dominican amber is a fossil resin of vegetable origin that comes from the legume Hymenaea protera, dated between 25 and 40 million years. It differs from Baltic amber by being more transparent, and by having a greater number of fossil remains.

This piece contains an ephemeral, belonging to the order Ephemeroptera.

Mayflies are relatively primitive insects, with a number of ancestral traits that were probably present in the earliest flying insects, such as long tails and wings that do not fold over the abdomen. Its immature stages are freshwater aquatic forms called naiads or nymphs, whose presence indicates a clean, uncontaminated environment. They are the only insects that go through a phase, the subimago, in which they are terrestrial, already have wings and are capable of flight, but have not yet moved to the state of imago or sexually mature adult. They hatch in spring or autumn, in large numbers.

Its life in the adult phase is very short, from which the name of the group derives (in Greek ephemeros = that lives one day). 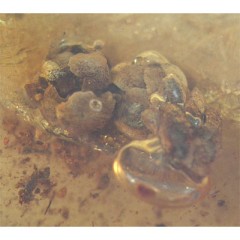 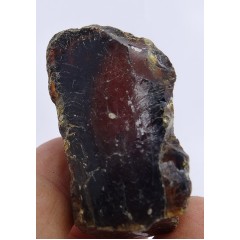